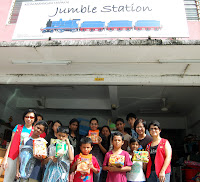 Jackie has been a single mother for some eight years now ever since her hubby left their matrimonial home in Subang Jaya without bothering to care for their two children, William and Emily.

The abrupt departure of her ex forced Jackie to take on the responsibility of bringing up the two kids single handedly and she did it in the only way possible – driving other people’s kids to and from school and tuition classes – in her really beat up old car.

Earning barely enough each month to survive was tough enough but this was made bearable by the fact that at least she and her kids have a roof over their heads. After all, the house was all paid for and no one can take it away from her thought this single mother, a former receptionist now turned transport driver.

She thought wrong! When the economy became bad and her ex ran out of money he pestered her to sell their matrimonial home which was registered in both their names. When she refused to do so, he took it on himself to re-mortgage it instead.

The bank official who handled the documentation assured Jackie that the ex-husband would be held “solely responsible” for the new loan and based on this assurance, Jacky signed the new loan documents. Big mistake! The loan was not paid and since the ex was nowhere to be found, the bank resorted to recover its monies by auctioning off Jacky’s house in USJ, Subang Jaya.

The successful auction bidder tried over a period of two years to get Jackie to move out of the house so he could claim possession of it but she unable to believe the home is no longer hers, stubbornly refused to let the new owner take it. He had no choice but to turn to the law and armed with the proper papers and accompanied by court officials took possession of the house. Like most single parents, the betrayal by their spouse and that of losing their beloved home is enough to make them want to blank out the reality of the situation until things come to a head.

Jackie and her two kids now found that the neighbourhood playing field has become her new ‘open’ home. The newly homeless trio suddenly found themselves battling on two fronts – finding a new home as fast as possible and fighting off strangers and neighbourhood kids who were helping themselves to the items that had been dumped in the open field. Heavy evening downpours made matters even worse, rendering everything soggy and damp while destroying a couple of their most prized possessions as well.

Fortunately, Jackie had the sense to call Subang Jaya ADUN Hannah Yeoh who responded swiftly to her plight by having Jackie and her kids stay at a budget hotel Cottage Inn while arranging for a lorry to cart away some of the bigger items such as their TV, sofa set, fridge etc to a storage space in Klang. Still not all the items could be hauled away and for the next four days, William and Emily faithfully went back to the field to guard their ‘gradually dwindling’ collection of displaced family possessions while agonizing over where they would stay next knowing full well they did not possess the means to pay for a deposit even to rent a new home!

That’s when Parents Without Partners (PWP) and Jumble Station (JS) came in to help out. Alerted by Hannah Yeoh’s office on Jacky’s plight, PWP immediately swung into action and managed to secure a small 3 bedroom flat just across the street from where JS 2nd hand shop is located.

The rental for the flat was RM700 a month and we paid for the rental deposit requested by the landlord - two months deposit and one month rental in advance plus half month deposit for utilities. We also gave William the cash needed to buy paints and brushes to do up the flat and make it a lot more hospitable for his family and enough cash to pay for their 5-day stay at the Cottage Inn.

Today, Jackie, William and Emily have a roof over their heads. JS which collects donated items for single parents was also able to replace many of Jackie and her kids’ items that had been stolen or destroyed by the rains. They have also be placed on our list of food bank recipients for monthly food rations that includes rice, noodles, biscuits, oil etc. PWP also partners other organizations like the Lions of Subang Jaya to bring groceries to needy single parents.

A very tearful Jackie, William and Emily couldn’t believe there are organizations out there like PWP and JS that would selflessly assist single parents in need regardless of race or religious factors and not expect to be repaid either! “For eight years I struggled all alone to raise my two children without help from my ex. Now I am truly grateful that PWP and JS are there to help us in our time of need. We don’t feel so alone any more and we really want to thank all those who cared enough to help us through this very difficult time.”
Posted by Jumble Station at 10:03 AM 1 comment: