Winds of Fortune Smiles on our single parents

About 40 poor single parents and the elderly brought in by Jumble Station were treated to a marvelous show of generosity by the Sunway Pyramid Management team yesterday. The forty comprising all the three major races of were the guests of honor for the launch of the Chinese New Year 2013 Winds of Fortune event on the Pyramid’s Concourse.
The dance performances by the Shanghai Tang troupe featured a number of very slick magic tricks against a backdrop of Chinese cultural dances, with many of the sleight of hand tricks so well carried out, one can’t help but be thoroughly awed.

But what was most interesting for the JS single parents is the launch of the SOS “Food for thoughts” Food Donation drive which was launched by four women stalwarts – Joanne Kam, Liang, Chermaine Poo and Gabriella Robinson. The food bank drive which will end at the end of February is aimed at encouraging supermarket shoppers to buy and drop some groceries into the SOS boxes placed outside of the supermarts to help feed the less fortunates. In this case, the beneficiaries will be the poor single parents of Jumble Station.

After that it was angpow and goodie bag time. HC Chan, CEO of Sunway Pyramid and Dato Ngeow Voon Yean as well as Kevin Tan all happily handed over a RM50 angpow to each poor single parent there as well as a goodie bag each thereby generating more smiles from the cash strapped folks. 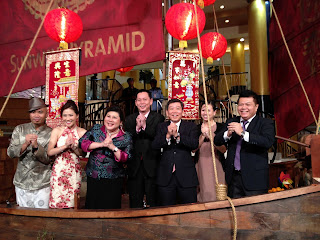 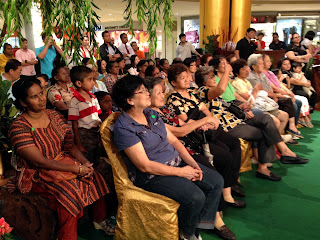 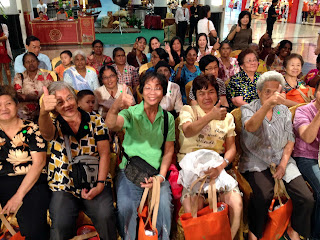 Topping off the celebration was the Yee Sang dinner at the Paradise Inn with many of the non-Chinese guests tasting this marvelous dish for the first time. By the time they got through the steamed fish, the roast chicken, abalone veggies and other dishes, they were so stuffed and ready for a good night’s rest indeed. One of them made this poignant remark –“wow, tak pernah dapat makanan bagus begini!” and to many of them, this was indeed a ‘wow’ experience and it’s all thanks to the kindness of the Sunway Pyramid management team!
Posted by Jumble Station at 1:36 AM No comments: