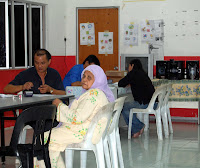 When one is poor and struggling, every little bit of help is much needed and appreciated. MyKasih a non-governmental organization that gets corporate organizations to donate cash which in turn is used to assist poorer folks recently dropped by Angsana Flats USJ1 to register the needy families as part of their latest exercise to reach poorer neighbourhoods.

Parents Without Partners was alerted of this planned event and had pre-registered its Angsana based single parents with the MyKasih team. So when the team turned up we found that the multipurpose hall at Angsana was already filling up with many people, most of them registering their details with the Resident Committee of Angsana under Encik Azmi and his team.

On our part, there was single mother Letchumy who struggles to feed her three sons on the meager salary she earns from Mydin. There was also her sister Marimmah who is also a single mother of three boys, there was Panjalai who works in a kindergarten and has two grown children, one studying at Help University on a scholarship obtained with the help of Jumble Station and the other still seeking a job without much success. There was also Suhaibah who works at JS and has a teenaged daughter to worry over while Irene Thung, who works in a restaurant took some time off to be there in person and Jackie You who drives two kids to school and has two of her own to care for as well.

Single dad Hasrun a lorry driver couldn’t make it for the event because he had overtime work while single mother Liza clean forgot about it, another single mother Dasma did not respond to the request for details. All three have forfeited their chance to participate in the MyKasih programme because the quota for the evening has already been met which is a real pity.

Having officially registered their details, the officials from MyKasih will personally visit the homes of the families concerned to ascertain the authenticity of their need. Encik Ahmad from MyKasih says one of the factors they will consider is whether or not the home looks ‘poor’ or ‘rich’. Ouch! I told him that my single parents homes will look very nice because JS policy has been to give the best household things and anything else they may need to poor single parents because that’s what our generous donors want us to do.

As such, the MyKasih officials should not penalize our single parents because they’re innocent of the trappings of nice things thanks to JS policy. Ahmad says he will keep that in mind and that’s a relief. Once the registered ones are cleared for assistance, they will be given RM80 a month – RM40 every two weeks – embedded in their Mykad which can be used at the Giant hypermart for all their grocery or other miscellanous needs. This cash assistance will go on for one year at least which should be of immense relief to the poorer folks at Angsana, Subang Jaya.
Posted by Jumble Station at 8:02 PM No comments:

Joshua is less than 2 months old and already he was embroiled in a little drama! His dad Danni is a Nepalese and works as a security guard at the One Avenue condo just opposite Jumble Station. His mum is an Indonesian Rumanan who also works as a cleaner at the same condo. They met and married without much fanfare and then had little Joshua 48 days ago. The drama began when Danni took little Joshua for his usual morning walk and got enticed into drinking by two of his Nepalese friends.

At around 11am Rumanan came down to the ground floor to get her son and inform Danni that lunch was ready, he was all tanked up and became amourous. When she rejected him, he lashed out at her and they had a terrible fight which became violent. A badly injured Rumanan ran off leaving a very drunken Danni to care for Joshua. Tipsy and weaving his way around the Angsana flat area, Danni apparently was so zonked out he kept knocking into things and apparently tripped on a stone which caused Joshua to fall from his arms and onto his head. A crying Joshua suffered a severe swelling on his head but his drunken dad refused to allow anyone to take him despite his drunkness. A huge crowd had gathered just outside of Jumble Station with many customers begging us to do something!


Yours truly finally managed to persuade Danni to hand over little Joshua by telling the father that his little boy needed new clothes and JS has lots of new infant clothes. Danni handed over little Joshua to us and he was hurriedly placed under protection from further endangerment by the staff of Jumble Station while awaiting the arrival of the police. Tensions arose when it was discovered that Danni is a Christian and Rumanan a Muslim and some self appointed local vigilantes then kicked and punched him in the name of religion. JS staff had a tough time trying to protect him from the brutal beating while ensuring he did not get near to little Joshua to snatch him away.When the police did arrive they came on motorbikes and we had to wait another half hour for a police car to come and take little Joshua for medical attention.

Imagine our surprise when we were told that Joshua could not go in a police car for whatever reason. Frantic with worry over his increased swelling and his constant crying, we rushed him to SJMC in an ordinary car but again bureaucracy reigned, the private hospital refused to begin treatment unless someone was willing to pay for it! Eventually it was decided that little Joshua would be sent to the PPUM (former Universiti Hospital) where he was immediately admitted to the children’s ICU ward.

Much later, his mother arrived at JS just as the UH ambulance arrived and she was taken to UH to await her son but after waiting for 4 hours, she returned to JS not sure of where little Joshua had been placed. The police then insisted that she along with JS staff go to the USJ8 police station to lodge a report on the baby injury incident and boy was it a long long process, we ended up having to drive all the way to Seri Kembangan where the Subang IPD was located and where we had our statements taken and recorded in case Joshua took a turn for the worse.

It was near midnight by the time we brought Rumanan to PPUM and she saw her little boy admitted as an ‘unknown’ in the ICU ward. Little Joshua had suffered a hemorrhage in his brain and both his arms were broken so he was kept in the hospital for five days as he underwent a battery of tests. His dad meanwhile was kept in the Puchong lockup pending investigations into whether Joshua’s injuries were caused by his father deliberately throwing him as some Angsana residents were alleging or if it was an accidental fall.

Five nights later, little Joshua was deemed okay to leave the hospital and brought home by his relieved mother and the next day, he was smothered in kisses by his very relieved, happy and very sober father Danni. Unfortunately for Danni, his fate will now have to be dependent on a judge but for Joshua, it had been a narrow escape from death and his second shot at life is nothing short of miraculous indeed!

True, Jumble Station's policy is to assist only Malaysian single parents but Joshua's critical state forced us to bend the rules a little and when we accepted this innocent bundle of joy we had to see it right through... which meant taking the mum to and fro the hospital, getting clothes for she and little Joshua, buying pampers and giving the mum RM100 in case of emergencies as well as driving both mum and child to all the police stations for the official reports.

The key thing is that Jumble Station played a vital role in rescuing this little innocent and in the end, little Joshua became the real hero of this near tragic drama when he emerged safe and relatively sound from his hospital stay.
Posted by Jumble Station at 6:28 AM No comments: