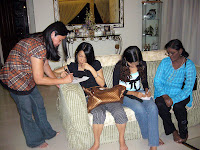 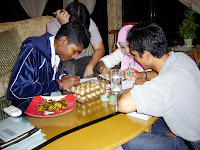 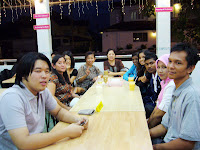 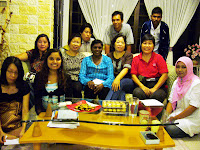 Jumble Station last night held an appreciation ‘makan’ for its workers, helpers and volunteers. The makan itself was in an Indian restaurant at USJ9 and present were the three founders, Ping Ngan, Lian See and Mary Anne.

The VIPs for the night were full time worker Fazila Saad, part time van drivers Fauzi and single mum Jacky, her son William who assists with collections during the lorry runs with Yun, night time worker and single mum Panjalai and her daughter Sujatha, odd job worker and son of a single mother Siva Nathan and volunteer Kim.

After a hefty banana leaf rice complete with yogurt and “rasem’ all of us adjourned to Ping Ngan’s house where a series of team building games were conducted to strengthen the team spirit among the JS folks. First off they were all asked to discover details of each other, from full name to favourite food, fruit, movie and colour and within a space of 10 minutes. Each one was then called upon to reveal the info obtained whereupon it was discovered that some had not got around to interviewing the person while others tried to remember what they had seen in their rival’s paper!

Mary Anne then divided them into two teams – even and odd – and shot off a series of questions all pertaining to JS matters. Questions such as how old was JS in 2010 showed that one team mistakenly thought it had been 6 years while the other team got it spot on 3 years! Even the name of the organization that owns Jumble Station was comically written as Parents Without Parents when in fact it should have been Parents Without Partners!

Still it was a good and fun way for the staff to really learn about JS/PWP and discard the erroneous info they may have unwittingly stored. A Blessed draw was then held with every staff and helper walking off with a prize each bringing smiles to all of them by the time they went back home. Mary Anne then urged them all to work collectively for the continued success of JS and to put aside their differences while embracing new changes so that together we can all march forward to make a greater impact on society and single parents in particular.
Posted by Jumble Station at 1:49 PM No comments: