Happy Chinese New Year everyone! May you have a great celebration with family and friends :)

From PWP Management and Staffs.

Posted by Jumble Station at 11:51 AM No comments:

Thank you.
Posted by Jumble Station at 11:28 AM No comments:

From the moment we entered, we could tell that this organisation approach was very different. We went through Angsana
Flat’s long, dark, echoing corridors that gave us an idea of the environment, before we found PWP’s Jumble Station situated at the ground floor. The children and PWP’s facilitator, Jayapratha Batumalai were already waiting for us.
The facilitator greeted us with a warm welcome and we entered into a brightly lit room with walls freshly painted up with a theme to promote reading habit among the children. The children looked agitated and afraid; they continue to provoke each other even when they saw us enter. No signs of smiles and affection initially. We gave a brief introduction about ourselves and our aim for the activity we organized for them.
We began with an ice breaking session by asking them to sit around in a large circle, while we engaged ourselves with them by asking for their names and ages. We provided a piece of paper mask to each of them as our activity for the day was based on masquerade theme. The children still looked puzzled and they were shy to put on the mask prepared for them. Slowly, the atmosphere began to change, as we initiated them to play our first game called Charades.
Briefly, we explained to them on how we were going to play the game. We divided the children into two large groups and elected a representative from each group to stand facing them. They were getting a little more comfortable now, as they were excited to play. We showed a set of 1-word flash cards to the representatives, where they have to use their creativity to act out to their friends based on the word they saw in the card. The children excitedly shouted out their guesses and the group that shouted out the answers first won the session.
Next, the children are requested to write down their ambitions and what they want to be in the future. The ambition writing session is to inspire and motivate the children in their way on pursuing what they dream of. We have prepared a card board for the children to stick their sticky notes on it. From what they have written, most of the children want to be a teacher since they feel that being a teacher is a role model and a respectable profession. Moreover, some children wish to become a policeman in the future, seems that they aspire to help the people who are in need. In addition, some children want to become a nurse, fireman, pilot and officer. There is also one child who wants to be an astronaut, which is remarkable!.
Simple origami activity had been taught: Pikachu and Heart. The children show great interest in the Pikachu folded. The teaching section is led by Tina and others are assisting. When Pikachu had been folded, children were asking for markers pen, to draw the Pikachu’s face on the paper. Next, the heart was taught and all children had done a great job. Their initiative and attentiveness are appreciated.
For the singing session, we have performed 2 songs which are called Hero by Mariah Carey and Seasons in the Sun by Westlife.
Before starting, we have distributed the lyrics to the children. Then, we explained the meaning of the songs to the children. “Hero” is an inspiration song to encourage people to believe in themselves and not to give up on their dream easily. “Seasons In The Sun” is a farewell song as the sign of appreciation for the kids.
Ren Jiet and Shah lead the singing session by singing “Hero” followed by “Seasons In The Sun”. The instrument used was a guitar which was played by Shah. Initially the children seemed to be very shy to sing together but they started to sing together with us after awhile. All the members and children sang happily together during the encore. The singing session ended with applause.
A lively chicken dance was led by our group members. We had danced two times on that day. The children stand in a circle together with us and did the chicken dance with the music. During this session, we can see a big smile on each of their faces. Hence, we felt very glad and satisfied that the children were actually enjoying themselves. Nothing can satisfy a person more than bringing a smile on the face of the innocent children. Before ending our activities, the children are given coloured papers to write down their feedback on our activities. We are happy and feel satisfied that all of the children have positive feedback to us and have their fun and enjoyed it. They love singing and dancing. Also, they enjoyed Origami making session. We can see their smiles on every faces. We are glad and encouraged, that our little effort could mean the world to someone.
That was an unforgettable trip. The feelings and the emotions have still stayed the same in us, after this journey. 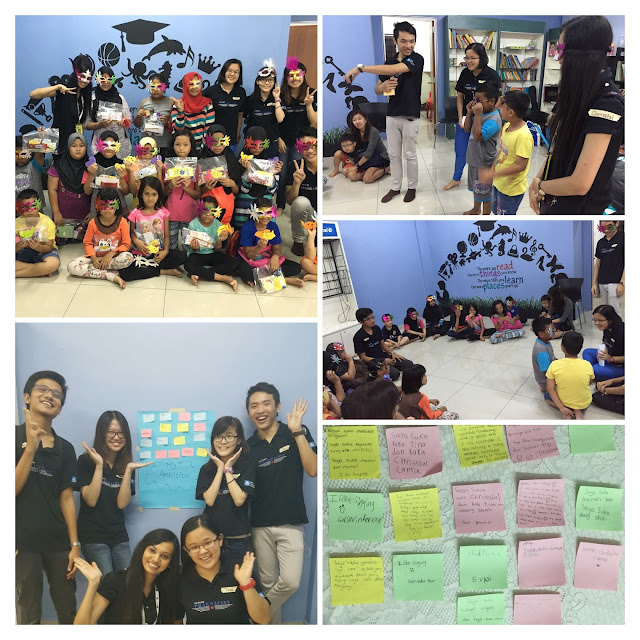 Posted by Jumble Station at 11:18 AM No comments:

Hi everyone!
After our recent long school holiday break, our Reading Station will re - open on 15th January 2017, this coming Sunday from 2pm - 4pm.
If you are keen to be part of us in volunteering, kindly call Jaya at 019-233 1730 (Mon - Fri , 9am-5pm) for more info and available time slots.
Come and join us and hope to see you