CSR with a difference! 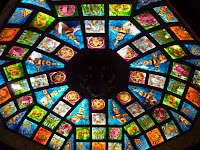 Many organizations want to do something for charity and that's good for Parents Without Partners (PWP) and Jumble Station but what we always strive for, is to do things a little differently from the norm. So when newcomer airline Oman Air first came to us saying they wanted to offer free trips for the poor single parents kids to Oman, we decided we’d do something far more radical then just have them all take the free trip.

We kicked off the programme by organizing an essay and art competition specially for our single parents kids and we had them in various locations, sitting in one single mum’s flat to do the essay or the art competition. Typically most of the participants aged from 11years to 20years, chose to draw rather than write and the winners turned out to be four candidates – Robin, Sujatha, Jilianna and Mary Anne Letricia. Since only 3 winners from each race could be picked, we had to decide between Sujatha and Letricia but the decision was made when Letricia failed to turn up for the face to face interview with Oman Air’s manager for KL, Kathleen Leong.

On June 6-10th, the three winners accompanied by Integrity PR’s Jennifer Nelson and her assistant Tengku Shireen and Mary Anne as vice president of PWP flew off to Oman where a very warm hospitality awaited us. Once there, PWP began to teach the youngsters how to take photographs of Oman scenery and activities the way a photo journalist would. Armed with small Lumix digital cameras donated by JS supporters, the three newbie photographers went about clicking and recording their experiences and every night reviewing their efforts.

Step by step they were taught the rudiments of what makes a good picture and urged to look at things from the perspective of a photo journalist because aside from taking photos, the youths were also encouraged to interview their tour guides and host Ghazan so that each photo would have a story to tell.

Of course it wasn’t an easy transition to go from gawking tourist to avid photo journalists but the youths went through the process pretty well and when they returned, they were urged to work on their travel journal, slide presentation as well as a travel essay. On July 28, the trio presented their efforts to the local press, they stood up before a panel of four to five press folks and wowed them over with their interesting photos. For the three 1Malaysia youths, it was their first time with the media and they handled them pretty well too. PWP asked the media people for their feedback on the youths’ efforts and the response was that the kids obviously enjoyed the experience, they were still so vibrantly enthusiastic about the experience and they were remarkably talented! For PWP, it was a satisfying experiment in carrying out the adage that “it is better to teach the children to fish than to give them just fish to eat!”.

What have we imparted to the kids? We’ve taught them new skills – writing and photography so that should they want to, they can develop such skills further to help improve their employable skills someday. They have also learnt to expand their horizons, having seen that there is a whole new world out there for themselves and that all that stands between them and success is the ability to go beyond their current impoverished state. For the single parents, it was also an eye opening period because now they saw first hand, how talented their kids are and all that’s needed is to give them the encouragement they need to advance further in life. This is truly CSR with a real and vital difference!
Posted by Jumble Station at 11:33 AM No comments: