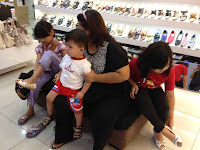 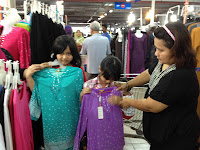 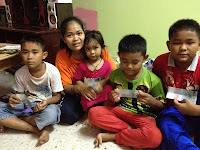 Hari Raya this year is a lot more celebratory than previous years for Parents Without Partners (PWP)’s poorer Muslim parents thanks to some cash contributions given by some concerned journalists, their relatives and kids. When JS SMSed a special request for old Baju Melayu and Baju Raya for the single parents and their kids to wear for this year, the idea was rejected in favour of a cash donation so that the poor Muslim parents could buy and choose their own clothes for Hari Raya instead. Around 7 poor Muslim parents and single parents received the RM200-RM400 (depending on the number of kids they have) and they included Hasrun Manaf and his three sons, Ani and her four kids, Siti and her two kids, Malar and her three kids, Bob and his three kids, Suhaibah and her three kids, Eda and her four kids. All were flabbergasted to get the news about the cash donation and they were truly overwhelmed by the generosity of the donors towards making Hari Raya a special occasion. A visibly tearful Malar for instance couldn’t believe that a stranger would contribute to make a Raya so special especially since she is so financially tight and trying so hard to make ends meet! Eda from Rawang was equally touched to get the good news. She became a single mother after her hubby died of cancer in September last year leaving her to care for her four kids. Today she runs a small café in Cyberjaya earning only RM1,000 a month and so the extra cash to buy Raya clothes for herself and her kids were an unexpected blessing indeed! The others too expressed their heartfelt thanks for this donation that would enable them to get a baju Raya and shoes for RM50 each at least! Ani who lives in Puchong with her four kids and who could not travel to Sabah due to a lack of funds, was in tears when she received the duit raya to buy clothes and cookies for her kids. A very grateful Ani said that she never expected such a helping hand and is most grateful to the people who chose to help her family in this way. To our Muslim single parents and to their very generous donors – Sharifah and family, Wah Foon and hubby.. a very BIG Thank You and Selamat Hari Raya to all!
Posted by Jumble Station at 3:15 AM No comments: 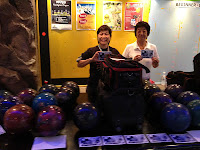 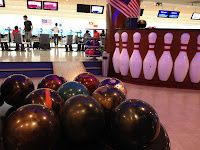 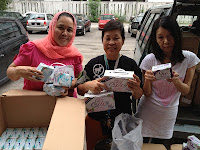 What do you do when someone donates around 30 bowling balls to you? Jumble Station received a call about whether or not we accept bowling balls and thinking that it was probably only one or two, we said okay! Imagine our shock when the lorry driver Hasrun delivered the 30 bowling balls and we had no idea what to do with them. That’s when we had the brainwave to call the nearest bowling centre which happened to be at the Summit Shopping Centre. The manager Mustafa Yassin was kind enough to allow JS to sell the bowling balls directly to the players at the bowling entre especially since there was a tournament on from 11pm till 1.30am that Sunday. So promptly at 9.30pm single mother Irene and I showed up at the bowling alley complete with the 30 bowling balls only to learn a couple of new things which we aren’t likely to forget. First off, all the bowling balls are not made equal – I used to think about the only thing differentiating each ball is the finger holding size per ball.. hah! Mustafa told us that balls weigh differently and the ones we brought over fell into two categories – the 10-11 pound category and the 13-14 pound category. The other differentiating factor was that each ball went according to the brand, some brands were more marketable than others, some were designed to spin as they roll, some were designed to give killer shots etc. Even the pricing was different – the lighter balls could be sold for RM80 and below while the heavier balls could be sold for RM100 and below. We also learnt that bowling balls were being sold from RM400 to a high of RM800 for the really high class model – so pricing our balls from RM100 and below should make it attractive for ardent bowlers! Well it turns out most Malaysians prefer the lighter balls and sadly we only had about 5 of these and these were quickly snapped but the rest could not attract any buyers even though we offered two balls at RM150 with a third ball given for free! In the end we left the remaining balls for Mustafa to try and flog them off to some newbie players but to date, there’s hasn’t been a call from him yet! And then JS received some 12 cartons of brand new “She” sanitary pads for our single parents in the usual day, night and promotional pack deals with the proviso that the single parents use these for themselves or if they want to sell to earn an income, the pricing must be close to the recommended retail price which was around RM9 for the daytime pads, RM10 for the night time. Again, the single parents and poor mums who received these were delighted because it meant they need not spend their own money buying these what more for their kids! Suhaibah for one who has two teenaged daughters is happy to get the pads because she says her financial situation is currently very tight and this batch of pads should last she and her daughters quite some time! Single mother Mariammah was amused to have been given sanitary pads but recognizes that this free gift will certainly help her save some cash considering that her salary is only RM750 a month with 3 boys to feed each month! And for single mother Mah who plans to sell the pads at the price recommended by the donor so that should greatly increase her monthly income to help feed her brood of kids. Anyone else out there with stuff to donate… just call or SMS 016-2202958 and we’ll be there in a jiffy!
Posted by Jumble Station at 1:55 PM No comments: