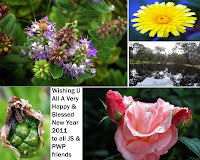 Today is the first day of the New Year and its the beginning of another year of fresh starts, fun activities and new experiences. Here's a card wishing everyone out there rooting for us to do more, to do better this year a lovely card from little ant who is currently resting down under for another week!
Posted by Jumble Station at 9:37 PM No comments:

A Thank You card to all our friends

Hey another Christmas has crept on us and we wanna take the opportunity to say a million thanks to all who have helped us in this ministry.
Posted by Jumble Station at 8:14 PM No comments: 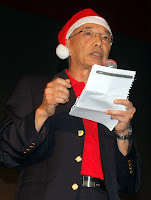 With the economy getting worse by the day, finance remains a big headache for many a poor single parents and when December comes around, the issue becomes a nagging problem. Why? Well single parents first have to feed their hungry hordes of kids, secondly they have to find the cash to buy new school items – school bag, books, uniforms, shoes, socks, even track suits in some cases – and all those require cash.

Realising this, Elim Gospel Hall in Ipoh organized a fund raising dinner with veteran singer Fong Pei Pei to help raise additional cash for poor single parents under PWP/Jumble Station’s care. Lim Lian See and Mary Anne, made the trek up north for this very special event and arrived just in time despite not being familiar with the route.

The dinner itself was held at a local seafood restaurant where some 51 tables were all taken up by church members, their supporters and family members. A 15 member choir kicked off with a Chinese rendition of Christmas carols followed by a speech by David Ho of Hovid Bhd who also heads the Professional Youth Fellowship (PYF) organisation up in Ipoh.

Mary Anne was then invited to share a little about what PWP has been doing to assist poor single parents and her speech was simultaneously translated for the benefit of the mostly Chinese listeners. After that, a cheque presentation for RM18,000 was handed over to Mary Anne by David Ho but sadly the picture could not be taken because the guy who was entrusted with the task of photographing the historic moment, forgot to switch on the camera and couldn’t understand why the camera would not function!

Meanwhile the guests tucked into the delicious Chinese course dinner while the veteran singer crooned her way into the hearts of her faithful supporters who listened and watched with rapt attention. Unfortunately, we had to rush out of the concert hall because Lian See’s handbag was snatched by a motorcyclist and we had to take her to the police station to make a report. Except for this one inconvenience, the Ipoh outing was a great success and we would like to thank God for kind and compassionate souls like Elim Gospel Hall members for reaching out to our single parents in need.

Once again a very “Big Thank You” for all those who made this event so successful and memorable.
Posted by Jumble Station at 2:46 AM No comments:

Three single parents children have been selected to go to Oman and they did it all on their own merit. The three winners comprise all the elements of 1Malaysia – Sujatha Sahadevan, 19, Suri Juliana, 16, and Robin Lee, 15 years old.
The three winners beat 13 other contenders in the essay writing and art competition centred on the topic of “Why I want to go to Oman” which was held last month.

Most of the competitors chose the easy route, preferring drawing over essay writing except for one Chinese girl who wrote her entire essay in Bahasa Malaysia and flawlessly too. The only snag was, the essay itself lacked the oomp says the two penultimate judges – Kathleen, the Oman Air sales & marketing manager and Jennifer Ann Nelson the PR for Oman Air.

According to the duo, Robin’s essay won over that of the one written in BM because of his creative style of writing and the unique focus of his essay – food. Funnily enough, Robin who isn’t anywhere near fat waxes lyrical about the kind of foods to be found in Oman and expresses an intense desire to taste all the different flavours to be found in Oman.

Suri Julianna, the second winner, impressed the judges with her manga style of drawing and her attention to detail. At her mother’s urging Juliana surfed the Internet to see what Oman had to offer and then proceeded to depict them faithfully – manga style. Compared to the entries from the other kids, hers was a class above, definitely. She was shrewd enough to also include Oman Air logo and in Jawi too!

As for Sujatha, she wrote a commendable piece on Oman’s touristy sights with a special interest on the visiting of markets also known as ‘souks’ while Mary Anne Letricia was an equally strong contender in the Indian category with her penetrative yet hugely bombastic use of words to describe Oman in general. Both were shortlisted for an interview where Kathleen would be able to finally decide on who among the two would be picked to go.

In the end, Sujatha won purely by default because Letricia did not want to make an effort to turn up for the meeting which was held at the Oman Air offices, smack in the centre of KL. The trio were asked by Kathleen to talk at length about what they’ve learnt about Oman while in the process of surfing the Internet and all three spoke confidently which made the interview very interesting.

Kathleen then informed the three that the actual flight to Oman would be postponed to January next year because the Omanis are in the process of winding down what with Hari Raya Haji, the King’s Birthday and the recently concluded Asian Games.

To all three winners, you’re de best and you’re the first of many more future pool of Oman air ambassadors that will be formed in the near future. Once again ‘Congrats’ to all winners and to those kids who did not succeed, there’s always next year to try again!
Posted by Jumble Station at 1:24 AM No comments: