Getting acquainted with Aquaria

Some years back, while working with the Edge as a journalist I wrote on the planned construction of an underwater world class aquarium to be known as the Aquaria. In 2005 this 60,000 sq ft natural aquatic museum was completed and opened to the public but I never got around to seeing it.

Another 3 big busload from DUMC were also there and that made for a huge crowd of youngsters all clamouring for a closer look. The views of the various, strange looking, and weird animals and amphibians all made for a very fascinating educational time for both the young and the old that went there.

The single parents and their little ones were mesmerized by the colours, the shapes, the stunning sizes of the various fishy creatures that swam, snucked or swivelled by in their mammoth tanks. The overhead glass aquarium afforded an unbeatable view of the undersides of huge sharks, stingrays, giant turtles that literally swished by from right to left as our little ones and their older parents watched with awestruck wonder.All the single parents and kids that came ad never been inside the Acqaria so it was a fascinating and memorable event for all.

The photos show it best and this is one of the many different ways in which Parents Without Partners and Jumble Station aims to make life more interesting and a lot more fun for the harried single parents and their little charges
Posted by Jumble Station at 8:34 AM No comments: 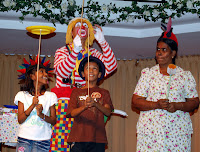 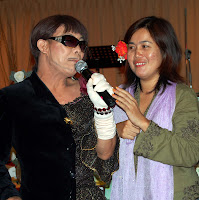 For a short three hours at least, our 50 single parents, mostly single mums and three single dads, and 120 little kids were able to forget their financial woes and have a rollicking good time. They were the special guests for our Magical Journey party held on May 2 2010 and many came with great expectations indeed, if not to win a prize at the lucky draw or to be entertained for the afternoon.

They weren’t disappointed, the event kicked off with some simple yet fun games one of which saw four men wrapping up an egg each with newspapers and having their precious treasure thrown force fully on the floor before a judge unwrapped it to see which egg was intact. The funny part was to have the female judges smashing two eggs and the lone male judge leaving both eggs intact!

Single father Adrian then had the crowd in stitches when he sashayed towards the stage to the tune of “Pretty Woman” and then proceeded to wow them with his mimed rendition of a half and half – he had painted his face and dressed himself as P Ramlee on one side and Saloma on the other side. So when he sang to single mum Suhaibah, he was the suave, heart throb crooner P Ramlee and when he turned to single father Boon, he was the dulcet sexy Saloma! Next he had single father Hasrun to don a wig and a guitar and sang “Have I told you lately that I love you” in tribute to PWP founders for helping him to get from zero to hero.

Sam Tee aka Uncle Button button-held his audience right from the beginning with his comic antics from cycling into the hall on his impossibly small bike to him letting his plates twirl atop a thin pole. He had the kids practically swarming the stage and clamouring to be his assistant while the single parents gaped and gawked at his fast sleight of hand acts. For many, the one hour slap stick humour Uncle Button put on was indeed a magical journey, one filled with fun and amusement all the way.

The event culminated in a lucky draw prize presentation with almost ¾ of the single parents walking off with a prize. Single mother Cindy Khong, 38 who has a 11 year old son Jinn Pen and and a 10 year old daughter Kinn Wei won the top prize of a 29inch TV. The delighted winner says that this is her biggest win and she can now return her 14inch TV which has been borrowed from her parents for the last 8 years since her hubby left her!

The winners and those who failed to win, nevertheless went home with a goodie bag filled with sponsored items from a RM10 KFC meal voucher from GDEX to sachets of vitamin C from Hovid, from shampoos and conditioners from Trends Unisex to the many little stationary items obtained from the fun fair coupons sponsored by Kevala yoga kakis. Newly registered single father Boon who has a 5 year old son describes it best in his SMS message after the event: “Thank you for all the wonderful blessings”. To all the friends and sponsors who helped to make the party the magically and heartwarmingly enjoyable event a Very Big Thank You indeed from Parents Without Partners Bhd!
Posted by Jumble Station at 11:03 PM No comments:

Jumble Station was invited to participate in the two day Earth Day Celebration at the Kota Damansara Community Forest reserve and brought along its many pre-loved item.
In line with the policy of recycling pre-loved items to save the earth we were able to share with many of the local residents there about what Parents Without Partners and JS is all about.

Many were happy to learn that they could just give us a call and we’ll swing by their houses to collect stuff they want to let go provided of course the items are still in fairly good condition. We had also brought along some 40 bottles of homemade pickles that one single mum with four daughters had made to sell. May believes strongly in her pickles and promises that once ‘makan’ the customers will come back for more.

Remarkably, we managed to sell 17 bottles and we hope to sell off the rest at the next visit to Amcorp Mall. The pre-loved items were a nice attractive addition to our booth but many folks out there were not keen to buy the pre-loved items. Still for us, it proved to be an interesting weekend because we got to hear many people singing including Hijau singer Zainal Abidin who turned out to be mischievously lively and charming. He had the crowd in the palm of his hands and backed by a very strong choir, sang this green number with great gusto. Taking his pix up close and personal was great while his songs were lovely to listen to especially in the green surroundings. Bet the trees were swaying along with the mesmerizing beat too!
Posted by Jumble Station at 2:00 AM No comments: