With Father's Day just around the corner, it was pretty smart of China Press to contact us about the possibility of interviewing a few single fathers for its Father's Day article which was published just last Sunday. The reporter Yu Yi eventually gave about four pages to this topic and managed to interview two single fathers - Boon and Adrian Ong (primarily because they were both Chinese single dads!). Although yours truly can't read or speak Chinese, here's the gist of the articles itself: Tan Chee Boon is 58 years old with a six year old son Justin John who was born sickly. The boy's mum a 26 year old woman abandoned them when she could not cope with the year long hospital stay following the birth of Justin but Boon persevered and today Justin is a robust kid attending kindergarten this year. Boon is unemployed because he has to be there for his son but he ekes out a careful living on his EPF funds and grows and sells some herbs and plants at his home in Sungai Buloh. They live in a house rent free thanks to a friend who works abroad and needed the place taken care of in the interim period.Jumble Station learnt of their existence two years ago and has been helping them in various ways including providing them with household items when their existing ones break down. Adrian's case was a rarity because he unofficially became a single dad when his tenant and wife left their eldest baby behind and returned to their kampung with their sickly second child. Adrian took care and bonded with the abandoned baby Farah Nisha until she was taken back to her kampung at the age of 7 when it was time for school. What many readers find remarkable is that a guy would bother to raise someone else child and a child that is of a different race too! Today, Adrian has not one but three "kids" when Nisha and her two younger sisters Natasha and Diyana come over to be with him for the school holidays! Two examples of fathers going beyond the call of responsibilities and doing a great job of it too - Happy Fathers Day to all single dads in Malaysia and around the world! 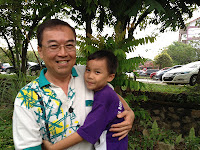 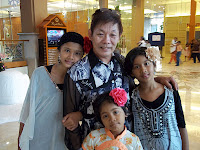 Posted by Jumble Station at 7:16 AM No comments: