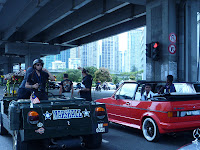 Parents Without Partners /Jumble Station brought a total of 11 poor kids for the recent vintage car ride, wholly sponsored by Elken Malaysia which is touted as one of the top players in the direct selling industry in Malaysia.

By the way, Elken is a made-in-Malaysia success story beginning in 1995 with strong foothold in Asian nations including Hong Kong, India, Thailand, Indonesia, Brunei and Singapore. Elken encourages its members touching lives in a more meaningful way and the vintage car ride last Saturday was a case in point.

The ride saw vintage car owners collaborating with Elken to bring joy to the little ones firstly via the stimulating, wind swept car ride from the Old Klang road right through the busiest parts of Kuala Lumpur and in the heart of the KL business centre where Elken’s Japanese restaurants were located.

The ride itself was as usual pretty exhilarating for kids and single mum Jacky who had never rode in such classic cars but the Japanese food was truly an enigma to many of the little passengers – most hardly touched the artistically beautiful food – finding it too strange for their liking and opted mainly for the mushroom soup which they could swallow.

Which was a pity because to see the fried prawns, the salads, the rolls all left untouched was a waste, perhaps the organisers should have realised that kids from poorer neighborhoods would have preferred simpler meals like fried rice, fried noodles and fried vegetables.

The other strange feel is that while the poor, marginalised kids were supposed to be the VIPs for the day, it turned out that the vintage car owners were the ones feted more than the kids themselves. From the start, while the kids waited for more than an hour for the event to start, the vintage car owners were the first to be invited to have their breakfast of sandwiches and fried spring rolls, no one remembered to feed the hungry kids.

By the time yours truly went to remind the organisers, the breakfast spread was no more and Elken staff had to make do with little satchets of biscuits and cookies instead. Again when it came time to giving out the goody bags, the car owners took precedence over the kiddies making one feel like the underpriviledged kids were just an after thought and not the key reason for the entire vintage car ride.

Ah well, Elken assistant Vice President Group HR Dr Henry Yeoh saved the day by being such a nice sport himself, taking time to chat with the little ones, walking up to many of the cars to get to know the special passengers and generally making himself available for many a photo opportunity. So kudos to Elken for its first ever vintage CSR project and hopefully, they will learn to be better than the best, the next time around.
Posted by Jumble Station at 11:10 AM No comments: 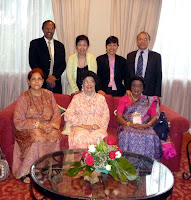 Human Rights organization Suhakam got the ball rolling recently with its day long seminar on the rights of single mothers. Led by the VVIP former 1st lady Siti Hasmah, some 200 people turned up for the event. The majority were representatives from the various single mothers association from as far north as Penang and south as in Johor.

Frankly I thought the seminar should have been expanded to include single dads as well and that it would have been better to have it renamed to ‘Single Parents’ rather than it be a Single Mum’s affair.

I was roped in to give my two sen worth because Lian See wasn’t comfortable in BM and after hearing about all the usual woes faced by single mums, it seemed like the perfect platform to share about what needs to be done to get the agenda of transformation for the single parents in Malaysia moving ahead.

I kicked off my sharing with some suggestions that I hoped would be picked up by the planners and they number around 5. They include:

1. Creating a national database of poor single parents, their details and the help received from which particular organization
2. Publishing a handy booklet on the different financial aids made available to single parents both by the government and by the private sector
3. Offering more focused financial aids and seed capital so poor single parents can develop a more entrepreneurial mindset.
4. Getting the Welfare Ministry to be sensitive to the plight of single parents by increasing their monthly aid from the current RM100 a month to a higher sum to keep up with the inflationary spiral. The RM450 maximum per family should be revised to RM450 minimum per family because the cost of living is escalating year by year
5. The Welfare Ministry needs to get its act together – stop sending single parents to three different places just to get their monthly aid, to conduct home checks with reference to the charity organization that is assisting them because JS policy of giving furniture, deco items etc could well backfire since the Welfare Department would deem the contents of their home as evidence of obvious wealth!

Will Suhakam convey these suggestions to the government? Will the relevant government organizations or agencies ferret out the truth behind such suggestions? If they do, then the seminar would have proven its worth, if nothing worthwhile emerges from this daylong discussions, then it would be one more exercise in futility that Malaysia is fast gaining a sour reputation for. More’s the pity if it does happen that way!
Posted by Jumble Station at 1:33 AM No comments: