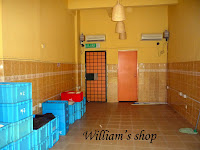 One of Parents Without Partner’s and Jumble Station’s stated principles is to help empower single parents and their kids to financial independence, kinda like teaching them to fish instead of feeding them with fish on a daily basis.

This is however easier said than done , often times, the single parent is too psychologically damaged to consider taking such a route or they are too afraid to even consider something that involves major responsibilities.

So often times, at JS we need to wait, encourage and nurture them to the right, stage where they will then be ready to take on the challenge of accepting a new responsibility. When that happens, the single parent will then be so happy and grateful for the opportunities given, for the second chance so to speak of making a difference and will work hard towards generating the extra income they need to forge on ahead.

Single father Adrian Ong’s case is one example. When he came to JS three years ago, he was a broken man – his earlier success as a fashion designer had all gone down the drain after being cheated, saddled with debts as guarantor for his former business partner, mistreated by his former employers and thrice attempting suicide. He had lost all interest in matters related to fashion designing and was content to work for us at our 2nd hand store. We mentored him and encouraged his many his talents until he was ready to embark on his own way again.
Today, JS managed to get him a small shop at PJ Old Town and he is now happily back in full swing in his favourite hobby – designing vintage wear and wedding apparel. The shop itself cost only RM150 in rental a month and that greatly reduced his overhead costs while his clientele is growing by the day. With the help of his sisters, he is now able to achieve his lifelong dream to have his own little boutique where his talents can be given free rein – needless to say he is thrilled beyond measure by the help and unstinting support rendered to him by JS. He says now he can rebuild his life and career and hopefully save for his planned RM15,000 surgery in May for his fluid in the brain proplem.

Single mother Jackie’s son is another matter altogether. William, aged 22 was not happy with the job that JS found for him, working in a factory that makes cleaning products. Both he and his mother claim that they make barely enough to pay for their rental and for extras and was in fact already two months behind in their rental. When the landlord called JS to complain and threatened to kick them out of the apartment, we decided to do something about it.

We asked William if he would be interested in starting his own business and he said that he was keen to get into the computer repair business. However due to his lack of nework contacts, JS realizes that he would need to have something else to rely on before his computer business can take off so it was suggested that he start a thrift shop in Setapak where the conditions are almost exactly like that of JS at Angsana Subang. The idea was for him to sell the donated items that JS would give to him while he builds up his contacts with the low cost residents there and thereby be able to supply their needs in terms of household items and IT requirements.

He agreed and a shoplot was promptly found and the rental deposit of RM3650 was promptly paid at end February. He gave in his notice and by March 7, he was free to focus on the shop. The only snag was, he suddenly liked his independent status better and took his time about getting the shop up and running. It took him 3 weeks to get just the TNB metre in and another 5 days just to get the forms for his business licence! By this time we had bought him a second hand car for RM3,000 and given him another RM2,50 for repairs because the tyres, clutch etc needed repairs done. Afterwhich more money was given to him to pay for his insurance, Puspakom inspection and JPJ transfer of names as well as RM1,400 for the overdue rental to his Jati flat so his landlord won’t kick them out while he is setting up this shop.

We thought that getting him the car and the shop would help galvanise him into action. Sorry, the sense of urgency to start earning his own income was sorely missing and come April 1, the shop was no where near to starting business. With nothing much being done JS naturally took him to task and boy did he react angrily. Describing the idea of a thrift shop as a “gila idea” he yelled that he had been having sleepless nights wondering how to repay JS back the RM11,350 that had already been extended to him. We told him to stop worrying about it and start doing something about it and so we gently began to move him towards that goal. Over the weekend his shop is now taking shape and hopefully once the doors are open for business he will understand what it means to generate his own income through his own hard work. JS hopes that this shop will someday free his mother of her need to drive kids to school which barely meets her monthly financial needs.

Two situations, two vastly different reactions – one brings tremendous joy, the other brings grief – JS admittedly has lots to learn too from these two experiences of launching businesses for single parents! The maturity factor is so very important in this entrepreneurial skills development aspect indeed. Hopefully with our guidance, William too will be a success after this initial immaturity hiccup!
Posted by Jumble Station at 9:42 AM No comments: