Be Grateful, Be Thankful... always!

Have embarked on a Gratitude Attitude Journal to remind myself of the many small blessings that come my way and this is one of them...

Lord.. I really don’t know why my phone had to act up today but I thank you for enabling me to dry it out fast enough, get a spare battery that fits it and allow my phone to hot sync with my PC so that all my contents and contacts aren’t going to be lost for good. Thankfully this experience is a good forewarning for me to back up all my info so that I won’t lose the data the way I did the other time.

I would also like to thank you earnestly for allowing me to be of help to Pasupthy and her daughter Mariam as well as Mary Dass and her daughter Linda. I had the lovely opportunity to assist them and be of real help to each of them by taking them all the way to Putrajaya.

As for Linda, I’m truly happy that I could assist in sending her to the National Registration Department and while there have a pep talk with her on her need to save more rather than spend all her earnings on goodness knows what.

I am also deeply grateful Lord that you did not make me to be a racist, the way the Malay civil servants were to Pasupthy especially when they dismissed my horrified look that it would take them 2 years to let Pasupthy know if her application for citizenship is approved or rejected.

I am truly so grateful for my Malaysian citizenship status that I’ve always taken so much for granted which has given me the right to vote in the Malaysian general elections especially after Pasupthy’s interviewer snidely remarked that ‘her one vote doesn’t count!”

Lord teach me never to be so insulting, so snide or so contemptuous of our God given right to vote and allow me to treasure my very own citizenship while praying that you will intervene for innocent folks like these single parents who ask for nothing more than what is their birthright!
Posted by Jumble Station at 11:45 AM No comments:

Gong Xi Fa Cai to all of U!

This fluffy Rabbit isn't staying in the hat! It's eager to nibble away at your bad vibes, hop over the dangerous spots in your life, leap with you in full abandon to a fuller abundance, bounce up in joy for your continued good health and pawfully pray for increased wealth for you and your loved ones. Gong Xi Fa Cai to all the loyal and wonderful supporters of Jumble Station and Parents Without Partners Bhd.
Posted by Jumble Station at 2:18 AM No comments:

Welfare O Welfare... where art thou? 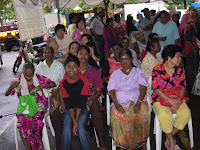 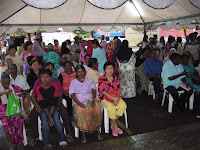 The Welfare Ministry is supposed to take care of the needs of poor, destitute Malaysians. I’m pretty sure they have millions of such people all over Malaysia but surely it does not take the Ministry’s workers , two to three years to get their act together?
Recently Jumble Station took several of the single parents and poor families they had been caring for in Angsana, Subang Jaya to the week long registration exercise conducted by Kelana Jaya’s MP Loh Gwo-Burne for the elderly, the disabled, single parents and families in need.
For single mother Mariam, this is her fourth time registering her need as a single mother earning only RM650 with three growing boys to care for. The first time she registered, the Ministry officials promised to pay her a visit to officially check out her situation. Apparently one official did but left a message with Miriam’s youngest son, 10 years old then to have the mum call the Welfare Ministry. Needless to say she never got the message. In 2009 Jumble Station helped her to apply a second time, six months went by, nothing.
A check revealed that the officer in charge of her case had quit and no one bothered to follow up on her backlog. Another application was put in last year and another officer dropped by to verify her situation while Mariam was at work, peeped in her rented flat saw that she had ‘nice’ things like sofa, /TV etc and concluded that she isn’t poor! Helloooo... those items were given to her by Jumble Station as per our policy of helping needy single parents and she shouldn’t have been deprived of her Welfare benefit because of this cursory glance. One phone call could have cleared this up but no.. and now three years later, Miriam is still struggling without a sen from Welfare.
Yeong Fong Pheng and her husband Victor are disabled or OKU because they are both deaf and mute. Both are registered with the Welfare Ministry and have been issued OKU cards each. Victor gets a small sum each month but his wife gets nothing. They have a five year old daughter and Victor works as a store keeper for about RM800 a month. Yeong’s attempts to find sewing work that she can do at home has been unsuccessful, she is illiterate and mute making it really tough to communicate with her. For some strange reason, Welfare has neglected her need for money to help raise her little girl!
Grace Ramayah is wheel chair bound. She has been getting welfare benefits when she was in Klang but when she relocated to Angsana to be with her son who has since found a job as a contract worker in a factory, her Welfare payments stopped. Frantic enquiries revealed that Klang welfare officers regard her case as ‘case closed’ since she no longer lives in Klang while the Subang Welfare Department says she has to put in a fresh application. That was done but to date, nothing has come out of it.
Panjalai has just turned 60 and had herself registered as part of the “Usia Emas” group. She has no idea what kind of benefits is available for senior citizens in Malaysia. She registered in the hope that the Welfare Dept will give her something, anything to assist her because her son is still unemployed and her daughter has not finished her studies at Help University where she was given a scholarship.

They and several hundred others who registered at Desa Mentari during the week long exercise were told to come back on Jan 30th Sunday at 9am to meet with Welfare Department officials over their needs, JS sent them over at 8.30am and they sat through till 11am only to realise they had been duped into becoming one of the “two hundred strong crowd” present to welcome a Gerakan politician! All they got from their Sunday wait was the same lame “we’ll look into your situation and don’t call us, we’ll call you!” promise. It’s time the Welfare Ministry in Subang have a real heart for those in need, forget the politics, just get the money to where it’s needed most – the hard core poor!
Posted by Jumble Station at 9:03 AM No comments: