Many people think of property developers as a materialistic, capitalist bunch but most generally are not and they show it in different ways too! One such developer, Bukit Kiara Properties which focuses on developing high end property projects showed their compassionate side in a rather nice, understated way. See, lots of companies have reasons of their own to try and win over the hearts and minds of those working in developer firms and Bkt Kiara Prop is well aware of this. As part of their drive to do business with integrity, they made it a rule that gifts received from well meaning “corporate friends or suppliers” must be declared and handed over by the recipients. All such gifts will then be collected and handed over to worthy homes and deserving charitable causes. Well recently, Parents Without Partners was chosen to receive the gift items from none other than NK Tong, the group managing director himself. The gifts were an interesting assortment from a coffeemaker to wine & liquor, from umbrellas to computer bags and files, from decorative items to thumb drives and hampers among others. For PWP these items will come in useful as year end gifts for our annual Back-to-School party, for single parents wanting to use the liquor to bake cakes or even for items that can be sold to raise more funds at Amcorp mall weekend flea market. So to the smart and generous staff of Bkt Kiara Properties, thanks for thinking of the poor single parents even as you continue to build lovely homes for the well-to-do!
Posted by Jumble Station at 9:39 PM No comments: 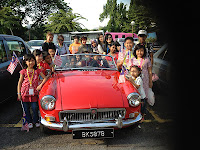 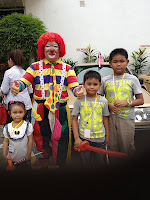 For many of us, getting into a car for a ride is so common place. For some kids from the orphanages getting a car ride to anywhere is …ah ya nothing to shout about, they act so nonchalant, so unimpressed, downright bored in some instances it makes the poor host wonder what went wrong. Well for Parents Without Partners Bhd kids which also includes those from poor families, a vintage car ride is very definitely an experience to treasure. Take Ani and her four kids for instance. A Sabahan married to an odd job labourer who can barely eke a living, Ani has had very few enjoyable experiences in her life, marred more often by difficulties than joys. So when the opportunity came for them to participate in the annual vintage car ride organized by the Royal Selangor Club Motorsports Ani and her kids were excited beyond measure – they were up and ready by 7am even though the van was supposed to leave only at 8am! Some 25 of us went for the ride in celebration of the 55th Merdeka Day and the cars galore had kids clamouring to take photos with their favourite vintage models or just hopping into any car that would take them for their ride. The open topped cars were the most irresistible while those with fiery colours be it flaming orange, black or red saw just as many kids clambering on board. The convoy zoomed from the Spastics Centre in PJ to the rustic beauty of the Selangor Coast Club of Klang where the hungry youngsters were treated to a plentiful lunch of meaty curried dishes, vegetables, rice and fruits topped with ice cold drinks that one couldn’t get enough off especially since the weather was blistering hot! And oh yes, the clown was around to pass them some cute little balloons while keeping them entertained with his motley magic tricks. It was obvious some of the kids from different homes must have seen the clown performing before because they could accurately predict what his trick would result in which quite detracted from the joy and surprise that the newbies were experiencing. All in all, Ani and her kids had the time of their lives and for PWP, that’s a priceless benefit – to bring joy into otherwise drab lives!
Posted by Jumble Station at 1:29 AM No comments: