Sumathi V Palanisamy, 45, a single mum of two boys, was forced by tragic circumstances to move into a small flat at Sunway Kayangan, Shah Alam after her hubby died suddenly during a road traffic accident in June 2009. She could not afford to pay the high rent of her old rented premises and this new flat was only RM300 because it was the top floor of a 5 storey walk up flat.

To make ends meet, Sumathi used her little Kancil car to drive other people’s children to tuition centres and after school activities while making do with a bare flat. Recently, Jumble Station was able to send over several bulky furniture – a kitchen cabinet, two beds and mattresses, book shelves, a gas oven, stand fan and a dressing table. When JS sent the items over with a lorry, her two sons were fast asleep so it would have been a very pleasant surprise indeed for the boys to wake up to a partially furnished flat.

A very grateful and breathless Sumathi (carrying furniture up 5 storeys is not a picnic!) said that the arrival of the donated furniture is beautifully timed because her two boys have been bugging her to buy some shelves for them to put their clothes and their books but she was unable to do so due to her lack of money! Now, thanks to some compassionate donors, Sumathi and her two boys will finally be able to sleep on proper beds and their precious items can finally be neatly kept in cupboards and not on the floor!

JS was also able to give her monthly groceries of Nestle products (Nestum, Nespray milk, maggi noodles and milo) a 5kg packet of rice and some tinned stuffs which has helped her to stretch her meager income of RM800 a little bit better. Aside from driving kids around, Sumathi has also been diligently making beaded necklaces, wrist bands etc for sale to her friends, neighbours and contacts to supplement her income.

JS hopes to send her more items that is needed such as a dining table with chairs, a two seater sofa set and some kitchen ware (blender, chopper etc) and beddings. Anyone with stuff to donate including arts and décor, electrical and electronic items, books (novels, motivational, DIY, cooking) and magazines etc, do SMS 0162202958 Mary Anne for follow up action. 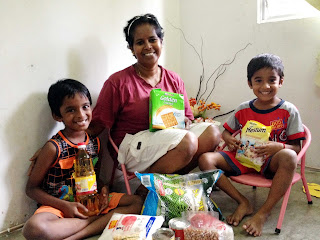 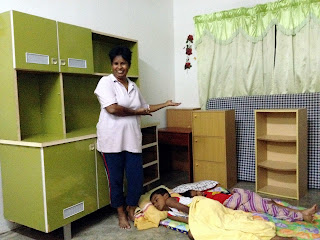 Posted by Jumble Station at 11:52 PM No comments: