Bread is the kind of food that even the poorest of the poor can afford to eat in lean times but how many of the poor folks do know how to bake their own bread? Hardly any so it was no surprise that when Gardenia Bakeries (KL) Sdn Bhd sent an invitation to PWP’s single parents to visit its factory, many single parents and their kids jumped at the chance. A total of 36 children and 14 adults arrived at the Gardenia Product Manufacturing plant at Lot 35, Persiaran Sabak Bernam , Kawasan Hicom (Section 26) Shah Alam at 10am on September 19 and were greeted by Gardenia’s marketing assistant Aida Fahima Mat Shah who acted as tour guide and translator for the hour and half tour of the place. First off was a short corporate video presentation on the manufacturing, delivery and distribution of Gardenia bread itself. There was also a short briefing on rules and regulation pertaining to the tour including the fact that no food or drinks are allowed inside the premises and no crossing the yellow line while walking as well as no touching the glass window while viewing. This is to ensure the plant is left clean and uncontaminated. Inside the factory, visitors could see first hand the various huge machines making and preparing the dough, kneading them, slicing them, filling them with cream and packaging them all. Both adults and youngsters were in awe at the use of the many different kinds of machines in all shapes and sizes utilised mainly for their specialized skills and the fact that the machines are kept in tip top condition and capable of running non-stop for 24hours, 7 days a week! The entire bread making process was a marvel and Aida was quick to share information and translate at the same time so that everyone understood the intricate process of Gardenia bread-making and bread marketing. The knowledge gleaned came in really handy during tea time when a Q&A session was conducted but a key question she posed on “what is the unique symbol in Gardenia Bread’s logo” had everyone stumped! Answers like the colours, the shape and the people who made the bread all proved wrong until PWP helper JR blurted out it was the flora – the tiny flower that is on the alphabet “i” in the word Gardenia instead of the usual dot that is its trade mark significance. Other Qs raised by PWP visitors included such issues as those raised by Farah Ain “what happens to bread that is rejected” “Rejected bread are sent to the National Zoo.” Emilda wanted to know if GST is imposed on all or some of Gardenia Bread and can old bread be freezed in the fridge? “GST is imposed on all except for white bread and old bread should not be kept in the fridge since it will attract mold and fungus.” One curious kid raised this sharp query “Why is Gardenia bread expensive?” “In reality, the price is the same but pricing is dictated by market and retail factors that comply with the law.” The plant visit ended with each visitor given a goody bag containing a Gardenia loaf, buns, muffins, chocolate spread and others, all freshly baked by Gardenia Bakeries. While the kids were falling over themselves walloping the goodies, the single parents themselves expressed satisfaction with the fact that they finally have a clearer idea of what goes into the making of Gardenia Bread and the plant visit was truly informational for all of them indeed. 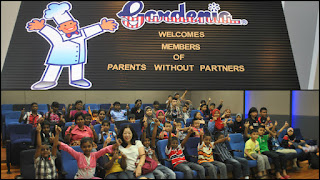 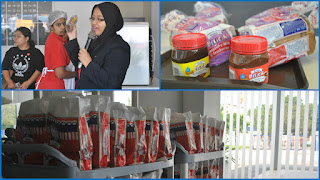 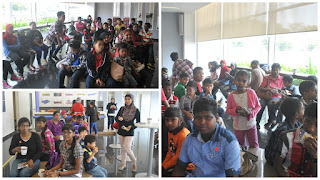 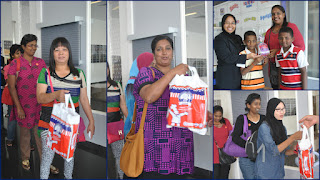 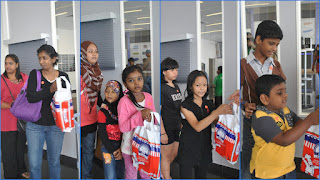 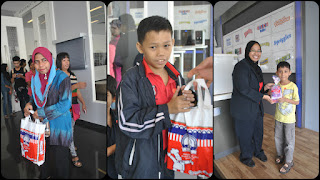 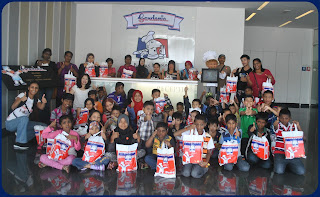 Posted by Jumble Station at 10:14 PM No comments:

It’s not just adults that love to take a ride in a classic car, little kids too find it absolutely fascinating and when Merdeka Day came this year, the little children of poor single parents were once again invited to attend the Classic Cars Merdeka Charity Event in Petaling Jaya, Selangor. While waiting for the different cars to gather, the children and their minders who were gathered near the Crystal Crown Hotel, found themselves entertained by a group of young adults from the global organization, Peace Road. To garner the patriotic spirit, they had the children singing Malaysian songs including the ‘Jalur Gemilang’ and ‘Kita 1 Malaysia’, followed by funny actions such as the chicken dance and finding the numbers game. Naturally to ensure the kids don’t go off hungry, they were treated to light snacks and drinks before they joined the convoy heading towards Subang Jaya. Waving small Malaysian flags, the youngsters and adults entered fully into the Merdeka spirit even as they posed for innumerable photographs. Upon arrival at SS15 Subang Jaya, an area next to Public Bank they were greeted by Subang Jaya V IP Hannah Yeoh, who gleefully joined the children in another round of sing-alongs, flag waving and Merdeka cheers once again! The vintage car drivers then took the children all the way to Lake View Garden where they were entertained by two balloonist creating fascinating balloons in various shapes and sizes. When asked about the vintage ride itself, Shahlini,12 and her sister Trishini, 10, both daughters of single mum Rathna , says she was very happy to have the ride. Mohammad Ridzuan ,9 also felt delighted to be part of the vintage ride, his eyes portrayed his obvious happiness. To round up the totally 1Malaysia children group, Matthias, Elijah and Isaac, three sons of single mother Jayapratha also were happy with their ride because this time, they got to try a different vehicle. What made it interesting for the trio was the fact they had a very interesting conversation with the driver about their future! After which, token in kind was given out to respective homes, PWP received a generous amount RM4500.00 in which will go on to help the smum/dads who needs it the most in this current situation! The event was capped off beautifully with the handing over of a cheque as a donation to PWP’s co-founder Lim Lian See who gave a short speech of thanks to the organising committee for including our children in their annual vintage charity ride. 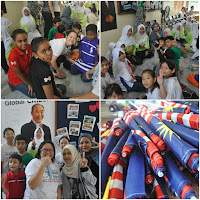 Posted by Jumble Station at 6:46 PM No comments:

When Parents Without Partners Bhd (PWP)’s single parents were told Microsoft Malaysia had a gift for them for the Hari Raya season, it was understandable if they thought it would be computer related items. If it was, it would not have been very practical for them because to all these poor single parents feeding their hungry brood tops their list of priorities before anything else. So it came as a total surprise for 23 single parents under PWP’s care to be gifted with a huge box filled not with IT products but with groceries including such staples as a large packet of rice, cooking oil, tinned foodstuffs and other daily essentials. The gift box coming close on the heels of Hari Raya proved to be a timely blessing especially in view of the fact that prices of monthly necessities had shot up since the imposition of the GST while the income of single parents were stretched really thin. The amount of stuff in the box was sufficient to last an extra month and for those who wanted to cook extra for family members who were visiting, they at least had something to offer their guests. Their testimony of the timeliness of Microsoft’s gift for the 2015 Raya festive season is evidence enough. Take single mum Juliana, who works as a nurse in PPUM while supporting her 3 children. She struggles each month to meet her financial overheads and is forced to work extra to earn that extra money needed.. So when Microsoft gave her that gift box, she was absolutely thrilled. “Alhamdulillah, thanks a lot to Microsoft, this gift helps to cut down my high cost of living and enables me to have a better Raya this year,” she said. Another grateful recipient was Aszuridah a single mum, who sells’ kuih’ with her mom and doubles by doing some babysitting as well just so she can continue supporting her 3 young children. She admits to undergoing severe emotional depression over her plight, but Microsoft’s generous gesture has brought some measure of joy during the Raya season. Single mum Hasnita who lives with her sister and her two small children was bubbling with happiness over Microsoft’s surprise gift. She earns a small income selling cakes and ‘nasi lemak’ and felt so touched that staff from a big IT centric firm like Microsoft would consider her plight and step in to assist. To these and other poor single parents under PWP’s care, who are most often overlooked or ignored by big corporate bodies, the hand of friendship and assistance from software giant Microsoft was an unforgettable gesture of kindness, an act they are so very thankful for. 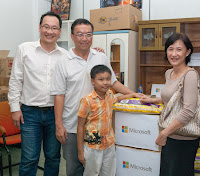 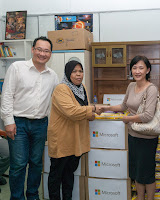 Posted by Jumble Station at 6:35 PM No comments:

Most people connect Deloitte with all things financial specifically auditing. Yet there is a softer side to the number crunching organization and this was made evident recently when it sent a team of young Deloitte financial whiz to do some community work for the poor. Appropriately named Impact Day, the team of 20 youths led by Ms Jes Lua, Assistant Audit Capture Managerin Deloitte Malaysia chose to help with the preparations for Reading Station, a project designed to assist the children of single parents and poor children in the Angsana low cost flats at Subang Mewah, Subang Jaya. Reading Station is aimed at encouraging poor youngsters to learn English, enjoy reading and more importantly, bringing English books to them directly for free. The help that Deloitte youths offered included helping to paint the walls of the Reading Station , painting interesting murals on the walls, fixing and placing the shelves to hold the story books, painting the walls outside of the 2nd hand shop Jumble Station, panting both the folding gate outside the both Reading Station and Jumble Station. Jes who had not known of PWP and its focus on poor single mums and single dads felt it was timely to reach out these folks but little did she know that this would be the most challenging community centric project Deloitte had ever taken on. JS manager Adrian Ong was on hand to open the metal doors and the lack of electricity due to faulty wiring saw all of them sweating from beginning to the end. While the women did the painting, the men did the carpentry and got the book shelves all ready for the many story books that was eventually placed on them. The team’s choice of the mural was also interesting - two children seated on the grass are reading a book and the act of reading increases the imagination, knowledge and eventually will spark the youngsters into wanting to learn and enabling them to someday becoming a graduate 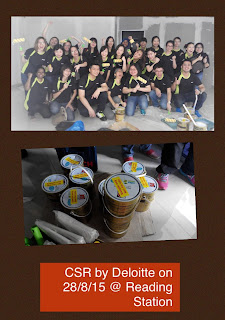 Painting and carpentry aside, the Deloitte team were told about what PWP and JS stood for and more importantly, what the Reading Station hopes to achieve as well. For many of them, the efforts put in for that day alone will prove mighty useful for the intended targets and their efforts will not go unappreciated indeed. 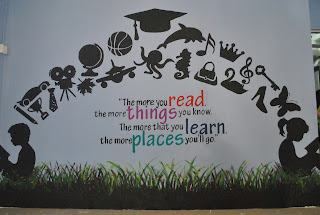 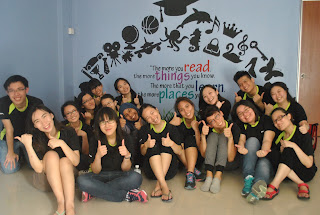 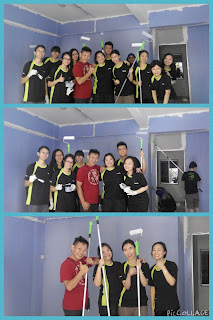 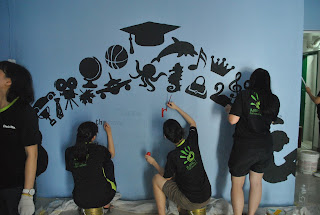 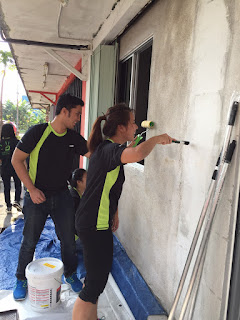 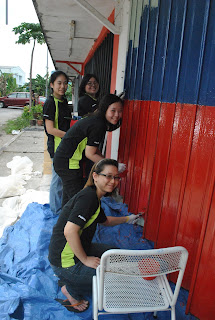 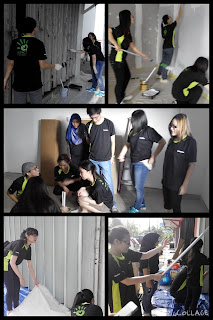 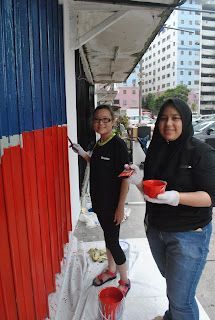 Posted by Jumble Station at 5:07 PM No comments: