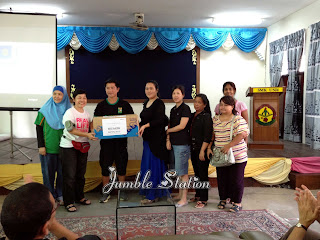 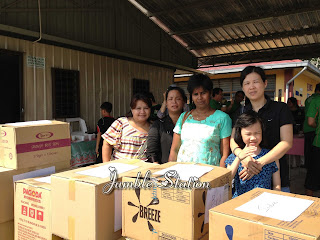 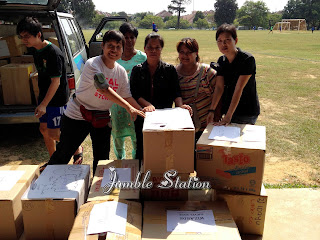 This year’s Mother’s Day turned out to be a special one indeed for many of the poor single mums under Parents Without Partners (PWP) Bhd’s care who usually don’t get gifts from their very financially strapped kids year in and year out.

On May 18th however, some 30 poor single mothers were thoroughly surprised with huge boxes of goodies each filled with – cooking oil, biscuits, packets of drinks, Milo, sugar etc – sponsored by the Subang Jaya Community Youth Football League teams that wanted to reach out to the marginalized groups even as they have fun on the field.

The group comprised kids as young as 7 years old to teenagers while parents and even some grandparents formed the bulk of the cheerleading and coaching teams that had been meeting regularly for the last 13 years since 2000. Interestingly, this is a volunteer-driven group that boasts a cute tag line "where no one is paid and everyone plays" - how lovely!

Together with Pertiwi the organization that mobilizes volunteers to operate its many different soup kitchens for the homeless within the Klang Valley region, PWP’s single mums, 7 of them were treated to a simple high tea complete with mee siam, curry puffs, popiah, luscious cakes and topped off with piping hot tea/coffee and ice cold syrup drinks.

For all the single mums hailing from USJ1 in Subang Jaya, Puchong, Desa Mentari and Shah Alam,  the big box of goodies were a complete surprise and a much welcomed gift indeed. Single mother Mariammah said that she was so touched by the generosity of the sponsors because her three boys just loved all  the items given especially the and the packet drinks!

Single mum Aida from Puchong was deeply touched by the many heartwarming words personally written on her box by the donor team – Wolves - and she urged me to convey her sincere thanks to all the wolves who had combined to gift her, her very special box of goodies.

Linda another single mother of three boys said that as soon as she had opened her special box, all her three boys grabbed hold of the biscuits first and chomped them in a flash! For perpetually hungry kids like these, gift food boxes like these are akin to winning the lottery indeed.

On behalf of the very happy single parents who received the food boxes donated, PWP wants to salute all the football happy kids and their very supportive fans, parents and cheerleaders of SJCYFL and we hope they will get many more fantastic goals even as they achieve their goal of reaching out to the community around them.

Posted by Jumble Station at 11:40 PM No comments: 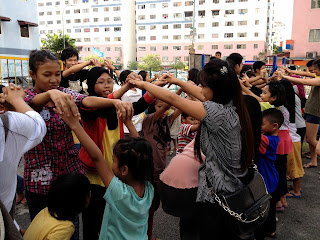 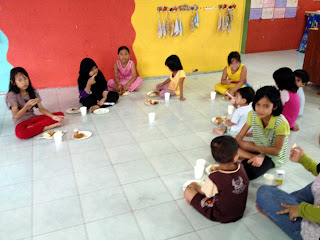 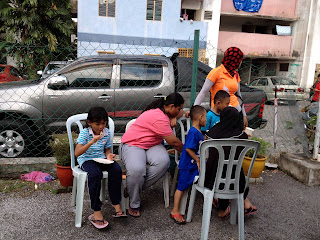 The youths of today have vastly different interests and needs compared to kids, the former is often preoccupied with the challenges of scholastic achievements and romantic ties perhaps while the latter are more engrossed in fun and games.

Still it does make for an interesting experiment to bring these two vastly different age groups together and help each understand the other while doing their bit for charity. It was precisely for this reason that Jumble Station partnered with the youth group of the recently to throw a party for the kids of the underprivileged sector in Angsana USJ1.

Some 20 of the youths came armed with loads of food to feed the hungry mites but before that, the more hyperactive teens, took on the challenge of organizing icebreaker games for the 65 or so kids of all races. Kicking off with a find your slipper game where all the kids were asked to put their left shoe or slipper in a pile and at the word “Go” dash forward to find their missing footwear – the resulting chaos – as kids scrambled desperately to find their footwear – generated loud laughters and giggles.

This was followed soon after by the game of two kids holding their hands out as a tree while another pretended to be a squirrel below – at the signal “fire”, the trees had to abandon their squirrel and find another while shouts of “hunter” forced the squirrels to run and seek new hiding places and the final ‘earthquake’ call saw everyone running helter skelter!

The final game was the “London Bridge is Falling Down” where the teens formed the bridge and caught the kids at the end but the funniest part was when the kids, tiny as they were – mostly 5-10 years old – became the bridge itself and their small stature forced the teens to bend double as they tried going underneath the bridge itself – to immense laughter and fun!

The afternoon finished off with a hefty meal of tasty KFC, nuggets, chocolate cake and ice cream for each kid and mums present and the handing over of a goodie bag for each child just before departure from the community hall where the event took place. All in all, it was a great and uplifting experience for the teens to learn interaction with the younger ones while the kids rediscovered how lovely it was to have big brothers and sisters to play with.

Hopefully, there will be more of such collaborative events to benefit the poor families and single parents for whom, parties such as these are rare indeed!

Posted by Jumble Station at 12:09 AM No comments: