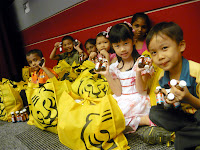 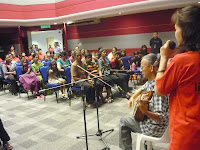 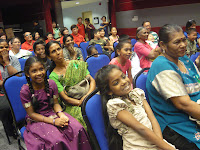 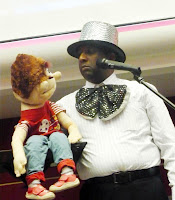 We just had our single parents party – our 4th actually – and it was really funny occasion for many of our poor single parents who turned up at Dream Centre in Petaling Jaya where the event was held. Some 60 single mothers and two single dads together with 200 children were on hand to play games, sing songs and laugh out loud with the others of like mind.

Interesting games such as the tissue thin game, the ball toss, the sticker hunt all had the kids and their parents hunting determinedly for a prize or two. 10 members of the Malaysian Association for the Blind then gave a lively rendition of country line dancing and proceeded to display their fancy footwork that one may find it hard to believe they’re unable to see at all.

Next Godfrey and his female counterpart serenaded the audience with old songs including Hank William’s Jambalaya and finished it off with Donny and Marie Osmond’s famous duet “I’m a little bit country, And I’m a little bit rock & roll!

However the one act that had everyone in stitches and rolling with riotous laughter was Pastor Ravi , pastor of the Indian members who together with his faithful companion the cheeky puppet had ensured a rollicking good time for all. The two verbally jousted and sparred with smart talk and wise cracks, it made the puppet seem so human like indeed.

When the show was over, each single parent was given a goodie bag filled with a number of donated items such as KFC vouchers and a prize each donated by GDEX, the local courier company while their kids were given an opportunity to choose which beanie baby toy they preferred and were also given several bottles of multivitamins from Hovid to build up their strength and their overall health. The single parents then topped off the evening with a hearty meal of Indian chicken curry and briyani rice, sambal with samosas and eggs. All in all, it was a deeply satisfying party for all concerned except that this time, we had omitted the lucky draw aspect which had many asking about it after all!
Posted by Jumble Station at 1:27 AM No comments: 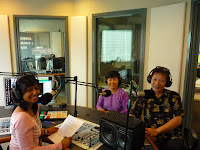 Guess what folks.. Jumble Station was on BFM recently where single father Adrian was being interviewed about his 2nd start in business and he credits it to Jumble Station's help. JS was invited by Meera the producer of the Bigger Picture programme to share about how we help single parents and how Adrian got back on the road to business success. You can listen to the podcast of the interview and hear for yourself what was discussed...just click on this link http://bfm.my/jumble-station
and happy listening!
Posted by Jumble Station at 11:05 AM No comments: 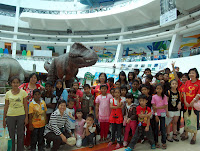 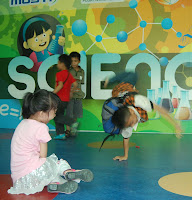 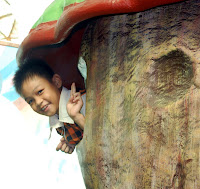 Talk about dinosaurs and the kids surely do come alive indeed. Recently PWP was invited by the Lioness of Subang Jaya to bring along 15 children of single parents for the Dinos Alive exhibition at the National Science Centre at Bukit Kiara. The 15 children soon ballooned to 20 and by the time we actually got on the chartered school bus, there were 30 of us, all from angsana at USJ1.

Arriving at the Science Centre we found ourselves one of hundreds of kids, all of whom had taken the start of the one week May school holidays as a chance to educate themselves about all things scientific and marvel at the giant prehistoric monsters! Ensuring our 29 youngsters stayed together at all times was a near impossibility and on the three occasions when we lost a kid or two, it was literally like looking for a needle in a hay stack or an ikan bilis in an ocean!

Despite that the outing was a huge success for the tiny tots, with the youngest Hakimi and his new best friend Hui Min awe struck by the magnitude of their Jurrassic pals. Funnily enough they weren’t in the least bit intimidated by the sheer size of the monsters but some other older kids were terrified by the sounds and life like movements of the dinos with one or two loudly refusing to enter the pseudo cave or jungle habitat.

A hearty chicken rice meal topped off the afternoon followed soon after by the youngsters giddily playing at the nearby playground, slipping, sliding and racing each other up and down some slides, crazily spinning the merry-go-round till they flopped down in a dizzy spell themselves or swinging like veritable tarzans on the four swings available at the park. All in all, the kids had a wonderfully refreshing time and wanted to know when the next “outing” would be so that they could be invited again. Thanks Lionesses of Subang for making this holiday season so special for our single parents and poor folks kids… keep up the good work.
Posted by Jumble Station at 8:40 AM No comments: