Pampering The Single Mums
Parents Without Partners Bhd’s poor single mums were given a creative pampering for the first time in their lives by US based Youth With A Mission (YWAM). Three young girls from YWAM, Courtney, Allison and Melissa had traveled to many of poorer parts of the world assisting the poor and the needy communities where the need was greatest.
This time, they paid a visit to Malaysia and were introduced into the personal lives of poor single mothers living in at government low cost flats at Lembah Subang in Selangor, Malaysia.
Courtney, Allison and Melissa shared a passion to care for the needy while building up their intrinsic worth, value and personal identity.
The three vibrant young women had gone through quite a number of unnerving experiences on their global charitable travels but nothing prepared them for the conditions they saw in what was supposed to be a modern country like Malaysia.
Led by social coordinator, Jayapratha the trio arrived at Lembah Subang, only to discover the elevator had not been functioning for the past two months. For the locals, this was nothing new, it often happens due to poor maintenance and vandalism. We were left with no choice but to walk up the flight of stairs, all the way up to 12th floor! While walking up the stairs, they saw firsthand the pitiful condition of the stairs, it was a veritable eyesore and the urine stench as well as the stench from the rubbish being dumped was nauseating. The safety factor of walking up and down the stairs was shocking due to the lack of metal railings to hold on to, on some flights of stairs. Making the matter worse was that there were no lights at all forcing the team to use their mobile phone torches to light up their way up.
Kalawathy a single mother of one daughter had her front door wide open to welcome the very tired bunch. The visitors were given a very warm greeting and gratefully agreed to be seated while waiting for the other single mums to show up. While waiting for the others to show up, Courtney, Allison and Melissa chatted with Kalawathy to learn more about her plight. When the other single mums arrived, they were given a short introduction to the three Americans and were pleased to be told that they had a treat in store for the single mums - nail polish and henna art pampering!
The 3 single mums were given the opportunity to choose their personal choice of nail polish colour which would be then painted on their nails. Mellissa and Allison begin pampering the single mothers with a hand massage each, something the single mothers had never enjoyed before because such manicure treatment usually costs around RM100 and above in spas. For these single mothers it was offered for free of charge by YWAM girls.
Nanthini, a single mother of 4 kids, said she had never had the thrill of pampering her hands, “This is my first,” she said. . Even her 4 year old daughter was given a manicure treatment, and like her mother, was thrilled to bits to have her nails painted! Kalawathy and her 13 year old daughter as well as her niece grabbed the opportunity to be pampered by Melissa and Allison while the henna art was carried out by Courtney. Kala, Nanthini and the other single mum were flabbergasted by Courtney’s artistic henna art work, and praised her talent in this skill which originates from Indians rather than a Westerner!
A very pleased Kala, prepared a simple lunch for everyone, offering fried chicken sambal, simple salad, rice and coffee. Everyone found the simple spicy meal, enjoyable time.
When asked, what they enjoyed the most from the pampering of single mums’ session, Courtney, who heads the YWAM team, shared that she was happy she could bring a refreshing and enjoyable talent to PWP’s single mums. Allison on the other hand enjoyed making people laugh and loves to hang out and casually chat with them. Mellissa shared that she loves to connect with different people, hear first hand their struggles and their challenges as well as how they are able to overcome such difficulties.
The trio, Courtney, Mellissa and Allison were delighted that they together with PWP could be a real blessing to these hardworking single mothers and families. Truly though, it was only a couple of hours, it was still a great time of bonding , a time of fun , a time of pampering and personal sharing , all of which was worth their weight in gold.

Read more »
Posted by Jumble Station at 10:25 AM No comments:

Jumble Station Hari Raya Celebration.
Jumble Station had the Hari Raya celebration with its Muslim staffs on Tuesday, 21st July held at Reading Station. We had a Pot Bless dinner with each staff contributing a dish or two. From ‘ketupat’ , succulent mutton ‘rendang’, chicken cooked in coconut with chilies and turmeric, mixed vegetables, spaghetti and many more.
The table was filled with lots of home cooked food, local desserts, kuih nyonya and cordial drinks.
The celebration was filled with love, joy and laughter. The kids were blessed with "Duit Raya" by Mdm Lian See Lim. 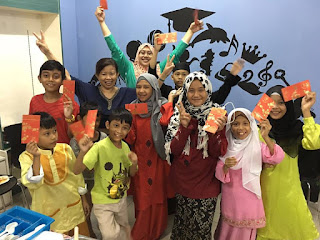 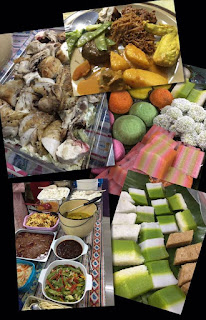 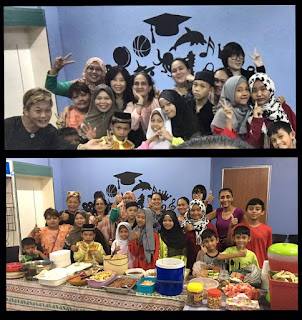 Posted by Jumble Station at 3:16 PM No comments: